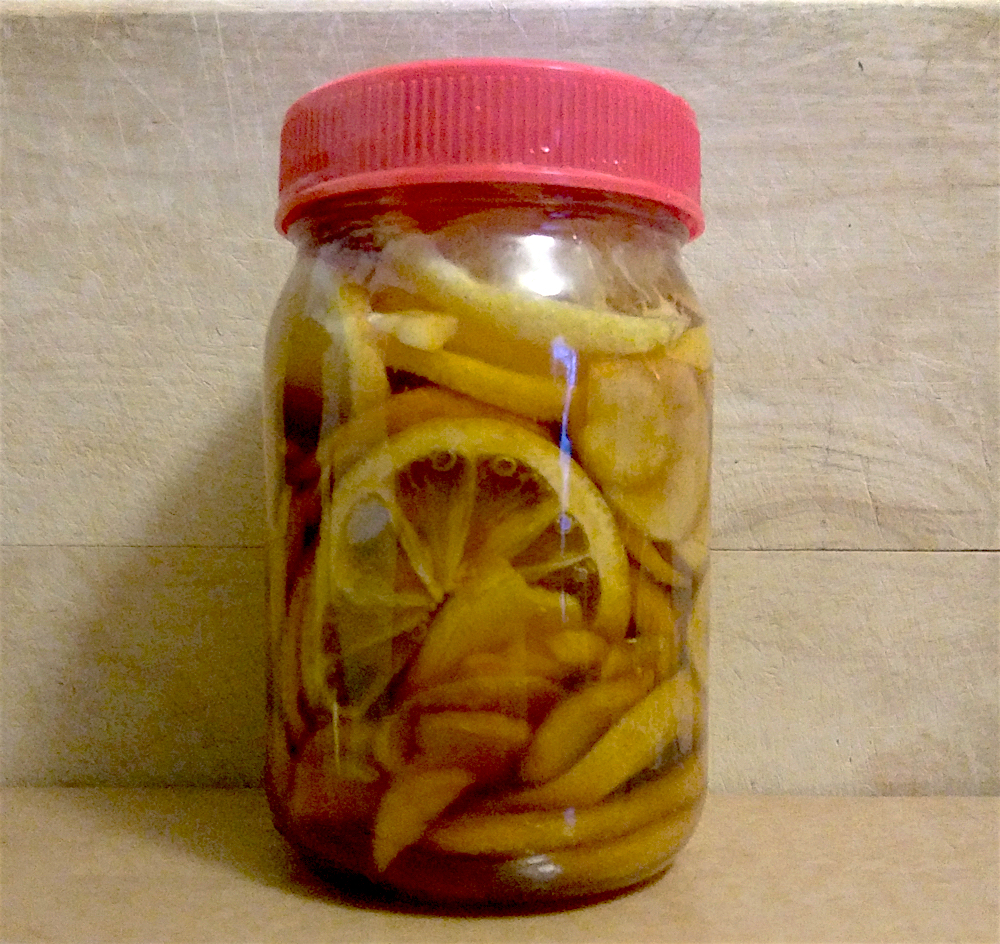 Well, there’s entirely too much snifflin’ and sneezin’ goin’ on in my newsfeed, so I will repeat my annual cold/flu curing advice, given to me by a Chinese Herbalist/Doctor I worked with briefly long ago. It works if you take it at the very first signs of a cold/flu. Plus, I’ve added a new twist I’ve come across this past year. Good Health to All…

To beat a cold or flu (and it has worked for me many times):

Get some Ginger Root from the supermarket (usually found with root vegetables like potatoes and onions). Look for fresh root, with a shine, or glow, to it. Cut loose a piece a bit bigger than your thumb. Peel it, then slice paper thin. Bring about 2 cups of water to a boil and add the ginger. Boil vigorously for 5 to 10 minutes, you want to reduce the 2 cups of water to about 1 cup. Pour through a strainer into a cup. Add some honey to make it tastier. Drink it all down while it’s hot. The ginger tea should be spicy enough to bring a flush to yer face (I find it quite enjoyable).

If you do this just when you are first saying to yourself, “Nah, I’m not getting sick” it will kick the cold/flu’s butt into the next county and you won’t get sick. If you wait ’til you’re sneezing and blowing thru a box of tissues, you will be less sick. I’ve had good results drinking a cup just before going to bed or taking a hot shower, or just after waking up. I’ve been using this remedy for about 20 years and have dodged a ton of sick bullets if I take it just when I’m feeling the first symptoms (that’s important). If I wait until it’s too late, the tea will still make me less sick.

It’s cold and flu season now, so keep this in mind and give it a try. It has worked wonders for me. Just the other day I was getting nasty sick, drank a cup kinda late and again a couple times for the next couple days. I was fine, just a little tired and weak, but sneezing/runny nose was gone.

Sometimes, it’s a bit of a hassle to make the tea, or maybe you’ve got just a little frog in your throat. This past year, I’ve begun to keep a pint jar (or larger if you have kids) in the fridge with a honey, lemon, and ginger mix. I can put the kettle on, grab the jar, and put a tablespoon or two of the mix in a cup. Makes a nice tea that is very soothing and seems almost as effective as the full on Ginger Tea. Probably a lot easier to get kids to drink, too. And, if you do get sick, it does a great job on easing the symptoms.

Take an organic lemon. Organic is important, non-organic lemons are often treated with fungicides and wax mixtures and you don’t want that in your medicine. I wash the lemon in a vinegar/water mixture to take off surface crud. Cut the lemon into 1/8” slices and remove the seeds. Take a piece of fresh, juicy ginger root, roughly the same volume as the lemon. Peel the bitter skin from the ginger root and slice it into nickel or quarter size pieces. Alternate layers of lemon and ginger until the jar is filled to 1/2” from the top. Take a good quality raw honey (locally produced honey is the best) and fill the empty space left in the jar with it. It’ll take a while for the honey to work into all the nooks, but you want to end up with the honey completely covering the lemon and ginger. Cap the jar and keep it in the fridge. Leave it alone for a week or two to infuse, then you can begin using it. It’s an ongoing project that can last for years. Replace the mix as you use it with fresh honey. Then, after a while, include some lemon and ginger slices in the tea and replace them in the jar. About every year, I pour the mix into a new jar to bring the oldest lemon and ginger to the top for replacement.

Oh yeah, don’t tell your boss about this. When the rest of the crew is droppin’ like flies, you can call in sick, drink a cup of tea, and enjoy a peaceful “unsick” day off ;)…