Here’s a handout from my Beginning Bonsai Classes. The Art of Bonsai begins by classifying miniature trees into these five basic styles. There are an infinite number of substyles that derive from these.

These guides were originally made with a typewriter (toldya Bonsai is an Ancient Art) and hand drawn illustrations. They were scanned from printed copies and are technically pictures. Click one to enlarge it, then click the grey box in the upper right corner to further enlarge it to read. 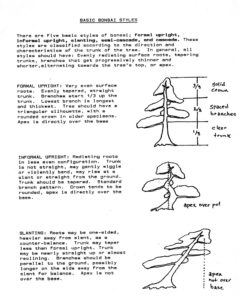 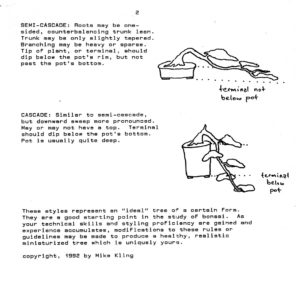 Florida Hornbeam, aka, Ironwood. Originally collected from the swamps of North Central Florida as a young tree, it was reduced in height to make the trunk appear thicker. Hornbeams have smooth, muscular grey bark, delicate twigging, and nice Fall Color, all of which will be developed and refined in the future. It is being trained in the Formal Upright style.