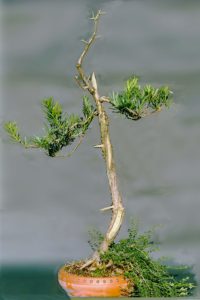 This Buddhist Pine (Podocarpus maki) was obtained from a nursery. It was damaged and in poor shape. The original plant was spindly and over 5′ tall, the developing bonsai was about 40″ tall in the pot.

Initially, the top couple feet of the plant was cut off and a deadwood stub was left. The top branch was wired upright, and a spiral of deadwood was cut into the trunk. After a year, or two, the upright branch was killed off and the bark stripped to give it the look of a dead snag at the top of the tree.

The branching/foliage you see in the “intermediate” and “after” photos was all developed from the two green branches in the “before” picture. This shaping was accomplished by spiraling wire around each branch and then bending the branch to the desired shape. The wire then held the branches in place until they made enough growth to stiffen and become set in that position. Simultaneously, the green shoots were selectively pruned to force them to bud back and grow denser, smaller foliage. That combination produced the results shown in the “after” photo. 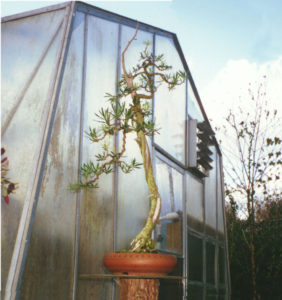 Future development would call for continued pruning to make the foliage even more compact and smaller, while making the masses more rounded and spreading, improving the balance. The spiral driftwood will be expanded by nibbling away at the scar tissue forming at the edge of the living bark, eventually reducing the live bark to a very thin strip. The dwarfed foliage will be thinned and the smaller branches developed in more detail to balance better with the reduced amount of live bark. The driftwood/deadwood effect will be maintained by bleaching and preserving it. If the live bark stays attractive as it sheds and cracks it will be kept, but it is more likely that it will be peeled slowly to expose the underbark, which is the same color as the pot. The underbark will be polished to maintain a pleasing texture. These effects will take decades to refine, and the tree could potentially live for centuries in skilled care. That is the Art of Bonsai.

REFINEMENT and EVOLUTION- TRAINING a PLANT to BE a BONSAI

This is a scanned copy of a handout that came with my first advanced bonsai classes in 1988. It was originally produced on a manual typewriter.
Bonsai is the art or process of dwarfing a woody plant by limiting it’s environment (just as Nature does in some circumstances) and by physically manipulating it to emulate full sized trees, in miniature. There is a lot of information in this small handout, if you think about and expand the ideas presented in it. 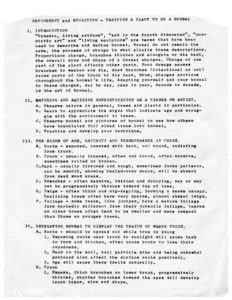 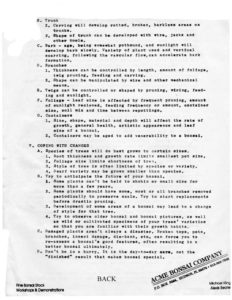